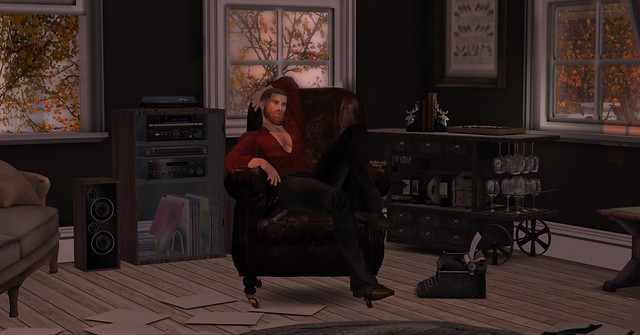 Today I had some extra time to sit down and do a proper blog post. Yaay!
I have been working on updating my RL hubby’s SL avatar (with his blessing) this last month and so far I am pretty happy with the results. He is now mesh from head to toe and I must say the shopping experience so far has been very enjoyable!

Well, first things first. Better start at the beginning. So I started by picking up a deno of the new male bento head from LeLutka along with the ones from Catwa and played around with them some. My hubby and I had a good time laughing over how the heads looked once I put them on over his classic shape. Hilarious, haha!
In the end I think we both felt better about the LeLutka Andrea as I had to do only minor changes to make it work with his existing shape. Also, I have been in love with the new LeLutka Moods.
Another thing that sold me on the Andrea head was the very nice skin that came with it and the convenient HUD. Yes, I was an avid Catwa head wearer for a long time, but the LeLutka HUD system is just so very sleek and easy! And the beards for the men in this HUD are awesome! Just awesome!
I promise I am not sponsored by LeLutka. Man, how many times can I say LeLutka in one post, haha!

Anyway, moving on: For his mesh body I demoed the male Slink Physique and Belleza’s Jake. Those were the two I felt would work best for him thinking about shape and wardrobe. I demoed the Male Pysique when it was released so I had an idea of how that one worked and looked, but Belleza blew me away with the detailing on their male body. Much like the Maitreya Lara it got those extra details that looks A-MA-ZING with materials turned on! So even though I thought the Male Physique would be a better choice wardrobe wise I went with the Jake body. My hubby agreed, so I am not the only one liking this body, hehe. I also really love that Jake is not super muscular. I haven’t really played around with extreme sliders, but if you would want a normal looking fit body this is the one to go for.

The price as of the date I bought the Belleza Jake mesh body was 2999L$. It comes complete with skins with and without body hair, bento hands, feet and loads of alpha cuts. It also came with a free outfit. Not my hubby’s style, but it is very nice of the creator to include something for you to go shopping in:)
To my knowledge this body is still in Beta meaning the price might go up at a later date, so if you are in the market for a new male mesh body I would suggest at least go pick up a demo of this one.
Only issues I have noticed so far is that the skin texture on the Clef de Peau.Body Tight T1 [JAKE] Applier I got to match the skin that came with the LeLutka Andrea head stretches a bit on the fingers and the neck seam is not seamless. The neck blender on the body helps, but that solution will never be optimal. But hey, it’s in beta still so those issues most likely will get fixed:)

So there we have the essentials out of the way, now for the trimmings:) I got some shoes for him at Shoetopia where I found two pairs to choose from and I got him the A&D Clothing – Shoes -Firenze- Coffee. I think they are a very classic pair and the textures are really awesome. A very good choice if you want something that goes with a more gentlemanly wardrobe;)

For clothing so far I haven’t found that many stores yet, so I still need those suggestions:P But I have been shopping at GAS and have gotten the Tommy jeans and the Adam shirt. A neat thing about the shirt is that it comes in both tucked and un-tucked versions. Very good for changing up the look! Both clothing items also comes with colour changing HUDs. I am not too keen on all of the the shirt colours, but maybe I just need more to layer and mix it up with. The jeans I really like though, nice colour options for the pants and the belt! Very easy to dress up or down.

And now for the pièce de résistance: My hubby has always sported a beard in SL and of course I had to find him a new one instead of that dreadful thing I made him several years ago. *shudders* Anyone else hate looking at old things they made a long time ago?
Anyway, I went looking for a bento beard and there are actually some options out there. Not many for Andrea yet, sadly. But I went with one from Dubious Intent, a store I have never heard of. I liked the beard, but found that the textures didn’t really match my needs, so I tried my hand at some texturing again, as I have done with several of my own hairs over the years, and am happy with the results for now. The colours that comes with the beard originally are very nice, just darker than I had hoped, my bad for not demoing properly.
If there is one wish I have for male avatars out there it is more facial hair! Preferably bento of course, hehe. But first clothes of course, gotta look presentable. Then again… Nope, stopit Nea. This post is long an messy enough as it is, haha!

Phew! I think that covers it all. Although very crudely, I am really not good at blogging clothes and avatar components, and especially not as many as this in one go. I probably should have made several, but I really wanted to put all the essentials in one post.

What the glorious man is wearing:

Check out my husbands work: http://www.blurb.com/user/Falaacus