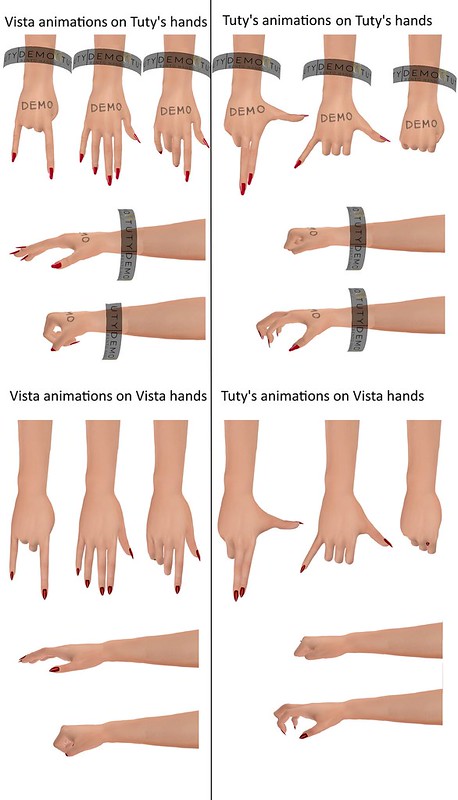 So I just learned that Tuty’s have released their Bento mesh hands and me, thrilled with the idea of more bento hands on the market popped over to their store to pick up a demo!
Arriving at the store I could easily tell where the hands were located by all the green dots on my mini map. It is in their Animations section of the store. Tp via the map located next to you on the landing point, or walk straight forward to the entrance where it says “Animations” and you’ll find it. Turns out there were more new shinys to look at too. They have upgraded their It Girl AO to include bento movements for the hands, Yay! I picked up the demo hands and hoped up to demo the AO. I never fell for the It Girl AO when it was first released, but that is only because it wasn’t what I was looking for at the time, but it is well made as all Tuty’s AOs and I really love the bento upgrade. Also, the sits are always very nice with these AO’s and are taken that extra mile by the new bento movements.

As I own the Vista hands I thought I would compare the two and how they perform each others included static poses.

Now to the hands themselves: At first glance the Tuty’s hands look more slender and longer but I think that the length is perhaps just an illusion since the fingers themselves are thiner. I kinda like the look of these more narrow hands and the HUD provided gives you oh so many options for finger nail shapes and lengths. You got squares and rounds and almonds and a bunch of nail polishes to choose from. I also really like the skins that come with the hands, I guess they go with the Tuty’s skins? I haven’t really worn their skins in years, again as they were not my taste. I always found them quite beautiful though. But anyway the included skins are very detailed and the tones are very nice.

Now onto the animations: While wearing one of each I demoed the It Girl AO and watched how the hands moved. I find that the Tuty’s hands work just as well as the Vista ones, at least as far as I can see.
Testing the Vista static hand poses on the Tuty’s hands worked pretty well too. As the rigging is different it will not look exactly the same, but I would work for me. Only the closed fist were not completely closed when using the Vista poses. So that is something to keep in mind same with the Tuty’s animations on the Vista hands the closed fist looks off since the fist is closed too much, and as you can see in the picture the thumb nail sticks out through the other fingers on the Vista hand. Nothing of this makes the other hand better than the other though, it all comes down to preference really. And both bento hands look really nice and both have a slight gap on me when you put your camera at the hand and look up towards the arm. That could be something I have done wrong of course and it doesn’t bother me at all as it is hardly visible.
The only negative I can spot on the Tuty’s bento hands are on the thumb on the longer nail settings. The nail look a bit wonky at the tip almost like the nailpolish has pooled down at the tip. I don’t think I would be a deal breaker for me if I decided to buy these hands as I am sure they will be updated at a later point, I just thought I would mention it.
As to why I have not bought the hands myself, I simply can’t afford to buy them at this point. I also, in addition to my Vista bento hands own both the Maitreya and the Slink hands, which I have heard will be updated to bento, so I don’t feel the need for another pair of hands just yet.
The price of the Tuty’s hands are 750L$ and has developers kit for mesh and skin creators so I bet we will have some lovely stuff available for these hands soon.

But now I have rambled on long enough. Go pick up the demos for yourself and have a look:)
Update: I have learned that the Tuty’s Bento Hands System is now update with a fix on the nails and Omega compatibility. The Omega system installer will be available very soon.

It Girl AO on Marketplace: https://marketplace.secondlife.com/p/TuTys-IT-GIRL-BENTO-AO-priority-3-4/10690191